Congratulations to Lina Toth on the launch of her new book, Singleness and Marriage after Christendom

Momentous change is taking place in Western societies and churches. Singleness is on the rise, along with growing interest in different pathways to human happiness. However, we still largely consider coupledom as the norm and a symbol of the good life. This is especially true in the Christian context, where the decline of “traditional” marriage and family patterns is often presented as an erosion of the Christian way of living. Yet when the church was very young, the world was also very concerned with the demise of traditional family ways–but the culprits accused of destroying family values were none other than Christians. A considerable number of them willingly chose to forego marriage, embracing Jesus’s vision of a new kind of a family: the church. This book follows the changes in the practice of marriage and singleness, from those early days of the Christian movement to our modern preoccupation with romance and coupledom as essential ingredients of a happy, fulfilled life. It argues that the current surge in the number of single people is actually an opportunity for us to reconsider both singleness and marriage in the larger context of a community of faith.

Singleness and Marriage after Christendom is available on the publisher’s website, as well as many other bookshops. 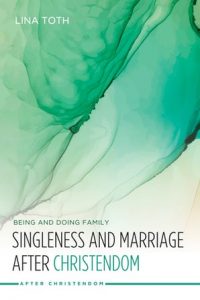