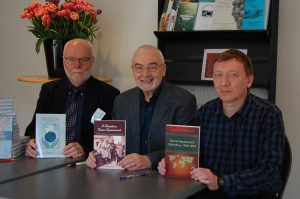 From 18 to 20 April 2018 IBTSC Amsterdam hosted a conference on the topic of ’Evangelicals and Oppression: Eastern European Perspectives’. During the three days 13 papers were delivered, ranging from life stories of Siberian Baptist women under Stalinist pressures to the practice of religious freedom in the pre-World War 1 era in the Russian Empire. The papers were delivered by Ian Randall, Miriam Dobson, Constantine Prokhorov, Galina Prokhorova, Lydie Kucova, Koos-jan de Jager, Johannes Dyck and others. Professor Walter Sawatsky, Dr. Ian Randall and Dr. Constantine Prokhorov signed copies of their publications at the conference.

The keynote speaker, Professor Emeritus Walter Sawatsky, opened the conference with a wide-ranging overview of Eastern European Evangelicals, emphasising that suffering was a trait of identity for these believers. Today, there is an important lesson in Eastern European Evangelicals’ story, which leads to the way of life which calls for standing against what Sawatsky defined as “redemptive violence thinking“. The papers were followed with lively discussions. And last not least – during coffee breaks the participants were able to enjoy warm spring weather and engage in conversations. A selection of the conference papers will be published in IBTSC Amsterdam publications – Baptistic Theologies and Journal of European Baptist Studies.

Pictured above are Professor Walter Sawatsky, Dr. Ian Randall and Dr. Constantine Prokhorov who signed copies of their publications at the conference.