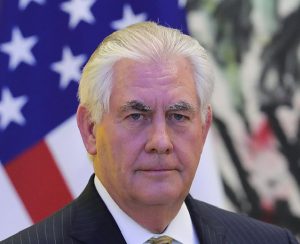 ‘…our fundamental values …are not our policies’ – so said Rex Tillerson the US Secretary of State in his recent address to State Department employees.

At the heart of a speech that ranged over a wide range of contemporary world issues was the question of how to translate “America First” into foreign policy. Tillerson understands “America First” as a call to secure America’s national security and economic interests. He was at pains to stress that the American values around freedom, human dignity and the way people are treated never change but policy, in the pursuit of “America First”, may.

I think someone needs to point out to Mr Tillerson that this dualism doesn’t work. Values are evidenced by what we do, not what we say. What happens in practice betrays our values and convictions irrespective of whatever creeds, constitutions or value statements we print on paper. It’s not for nothing that theologian James McClendon argued that ‘…virtues have their home in connection with particular practices whose pursuit evokes exactly those virtues’ or, as Jesus put it so succinctly in the Sermon on the Mount, ‘by their fruit you will know them’.

Furthermore, “America First” is a value statement that of necessity puts the freedom and human dignity of non-Americans if not second, certainly of secondary consideration. Tillerson said that one of the most difficult things he’s thought about is how to advance all of these things – “America First” and the values of freedom and human dignity – simultaneously.  I’m not surprised.

It may be that the residual memory of the values of freedom and human dignity may ameliorate some of the ambitions of the present administration and the policies that emerge under “America First”. It may be that the realities of global interdependence and need for cooperation – which Tillerson acknowledges – act as a restraint on what might otherwise be a thoroughly myopic strategy, but make no mistake about it, “America First” is the new determinant value.

Every government has a responsibility to seek the welfare, wellbeing and safety of its people, including the American government. The level of abuse and exploitation of people by corrupt governments around the world signals the need for voices to call out evil and deploy resources to defend the weak.  But, it’s a short step from “America First” to “to hell with the rest”. When the irreconcilable nature of these competing values becomes clear, let’s pray that freedom and human dignity win out.