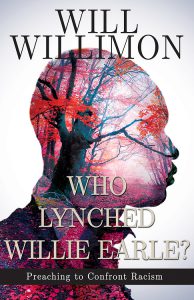 The below  is part of a reconstruction from dozens of confessions given to FBI agents as recorded by Will Willimon in this book.

“So I drove myself to American Cab, checked my sheets with Mr. Norris and Mr.O. C. Berry. I went outside and I seen two Yellow Cabs pull up. One driven by Rector, the others by Marvin Fleming. They had gone and got whiskey at Poinsett and were liquored up good. I guessed. They knew I’m a Baptist. I don’t need to get drunk to do right’.

The ‘right’ which he was going to do was to take an untried and convicted ‘negro prisoner’ from prison and kill him.

This albeit reconstruction demonstrates a mind set which clearly appeared to be internally consistent including with the Christian faith: a faith in which liquor is bad but killing a man is okay. In the laboratory of history, this sort of mindset has been exposed as racist, ignorant, and woefully distant from any expression of the Christian faith which places, as does the Christian Scriptures itself, the person of Jesus at the centre of God’s revelation in history.

Here and there on social media a claim is currently made along the lines – ‘you are calling this racist to shut down freedom of speech’.

No, to name something racist is to call it out for what it is – to discriminate against a person on the basis of their race. Racism: ‘Showing or feeling discrimination or prejudice against people of other races, or believing that a particular race is superior to another’.

To be sure some people may choose to so discriminate and indeed posture some sort of moral high ground by asserting their right to do so.

They may indeed feel that the Universal Declaration of Human Rights when it states that ‘Laws must not treat people differently because of their race, sex or way of life’ is just ‘liberal’ and requires to be pushed aside by a ‘conservative’ ‘saying it like it is’.

None of the above, however, makes the content or manner of expression right.

Rather with Willimon Christians centred on Jesus Christ are invited to see ‘racism as an opportunity for Christian to honestly name sin and engage in acts of “detoxification, renovation, and reparation”‘.

A fuller review of this book will appear in a future edition of one of our Journals, but there feels an urgency about its message…like the urgency of a man beaten on a road and needing a Samaritan to come past…