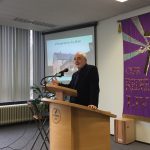 IBTSC Amsterdam Hughey Lectures in January 2017 were delivered by the internationally renown Baptist historian Dr Ian Randall. The focus of this year lectures was on Baptist and Anabaptist peace witness between the First and Second World Wars. It was good to see more than 40 people gathered for the event, including IBTSC friends and alumni. IBTSC is thankful to Tyndale Seminary who provided their chapel for the conference day.
The first lecture explored British Baptist involvement in the peace movement, and the second lecture analysed the development and role of Bruderhof community as they taught and lived out the message of non-violence. However, the practice of reconciliation and peace was not always easy nor straightforward. Baptist positions fluctuated between statements, such as “we are forced into this war” and “a nation cannot wage a war to the glory of God”. It was also thought provoking to see how changed situations forced a number Baptists – who are, after all, a convictional community – to change their positions regarding war. 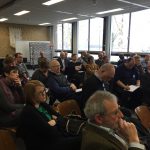 In next lecture, the speaker led the audience into a better understanding of Bruderhof community, and their links with Quakers’ peace message. Eberhard Arnold, the founder of the Bruderhof, was well educated and aware of theological and philosophical ideas of the time, but found the convictions of discipleship of Anabaptists to be most relevant for Christian life and practice. These believers, that included members from different denominations, were convinced: “Under no circumstances will any member of our communities join the fighting forces or do any alternative form of service.” However, this caused both political and popular opposition and persecution towards these believers, and they were forced to emigrate to Paraguay. From there, their story continued…
The participants noted how relevant the topic was for the present context in Europe and in the world. Or, in prayerful words of Baptist Times from 21 December 1917: “Lead us back into the paths of peace from which, like lost sheep, so many in these days have gone astray.”