The 9th of September 2014 saw the first defence and promotion (graduation) at the VU of an IBTS Centre Amsterdam PhD student, Jon Hardin. 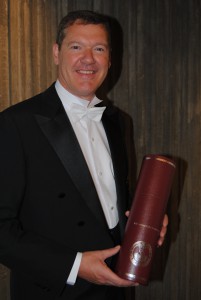 On this occasion in the Dutch style, Jon publicly defended his PhD thesis: ‘Creating Convictional Community: Missional Spirituality in the Moravian Community of Bethlehem Pennsylvania, 1741-1762’ and was awarded the title of ‘Doctor’.

Jon Hardin, from the USA, first started as a student on our old doctoral programme in Prague in 2006. From the beginning of his studies, he was interested in the Moravian community that was established at Bethlehem, Pennsylvania, in the mid-eighteenth century. Initially he was interested in combining it with reflection on the missional calling of the church in contemporary America, but he was persuaded by his first supervisor, Ian Randall, to concentrate on how the Bethlehem community itself in the period from its foundation until 1760 expressed and deepened its missional spirituality.

There is a lot of material on this community, which is good for a PhD student, but also somewhat daunting, and despite having to deal with a serious illness that made study impossible for several years, Jon kept up at an impressive rate of work. He was able to read and organise the material into a series of chapters looking at the worship, hymnody, community meetings, prayer and art of Bethlehem, and how they spoke to the founding missional vision of the Moravian community. 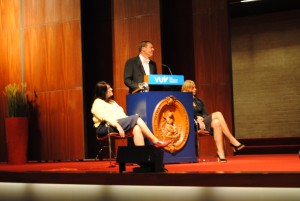 In all this Jon was helped by Ian Randall, and later Tim Noble, as well as by a leading American Moravian scholar, Craig Atwood. In 2013 Jon transferred to the doctoral programme of the VU University in Amsterdam, and from the VU side, Prof. Piet Visser added his expertise, and equally importantly his knowledge of the VU system.

Jon submitted his doctorate in early 2014, and it was read by a group of five readers, all of whom were happy to pass it for defence. So it was that Jon came to be in the Aula of the VU University, where he was able to respond fluently and on the whole convincingly to his five examiners, all of whom pronounced themselves satisfied with his response. This was highly deserved, as Jon had produced a very solid, carefully argued, well-written and convincing study that fully merited the award of the title of doctor of theology. 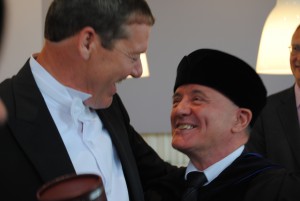 “First Fruits” is the title of a painting by a Moravian artist that Jon used as the basis of his final chapter. In the rather splendid setting of a Dutch doctoral promotion, with its formulae, ceremonials and impressive clothing, Jon has written his own name into the history of both IBTS Centre in Amsterdam and the VU University, as the first fruits of the partnership between the two institutions. We all hope it is the first of a ripe harvest, and we salute Jon for his excellent achievement. (Tim Noble) 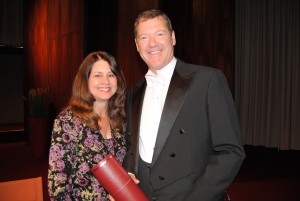