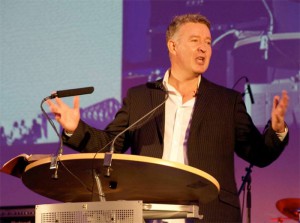 Following its meeting in Prague on 1 November the Board of Trustees of the International Baptist Theological Seminary (IBTS) announced its unanimous decision that the Rector of the International Baptist Theological Study Centre (IBTS Centre) in Amsterdam is to be The Revd Dr Stuart Blythe, at present Interim Principal of the Scottish Baptist College, where he has been on the staff for the past eight years. He will take up his new post in the summer of 2014.

His primary areas of teaching and research are in the areas of practical theology with a concern for Baptist and anabaptist identity and the contribution which this particular perspective can bring to church ministry and mission. Over the years he has been involved in various ways with the Baptist Union of Scotland and has encouraged thinking and practice in line with what it means to live under the rule of Christ.

The Scottish Baptist College is based in the University of the West of Scotland and Stuart has continued to develop his learning through this University with a Postgraduate Certificate in Learning and teaching in Higher Education. He is committed to the idea of life-long learning and that education can be informative, formative, and transformative. He has several published articles in his specialist area of homiletics. Recently he has participated in the annual Doctoral Colloquium at IBTS Prague.

Dr Blythe describes himself as a ‘convictional Baptist’ with a passionate concern for God’s mission. With respect to his new position he says he feels honoured to be invited to take up this post and excited by the challenges ahead. ‘Our churches in Europe and beyond face a challenging and changing missionary situation. IBTS has an established reputation of high academic quality not least with attention to the Baptist tradition. My hope is that the tough thinking, research interests, and students of IBTS will be able to support our churches as they seek courageously to bear faithful witness to Jesus Christ in their various contexts. The relocation of IBTS to Amsterdam seems somewhat symbolic and the close partnerships this offer, full of potential.’

Stuart has been married to his wife Susanne for 29 years and they have two grown up children, a son Stephen (25) and a daughter Kim Michal (21). He was converted and baptised as a teenager in his home town of Uddingston near Glasgow.

Stuart Blythe’s appointment was warmly welcomed by the outgoing Chair of the IBTS Board of Trustees, the Revd Dr Ruth Gouldbourne, who also chaired the Search Group: ‘Appointing somebody to the kind of key position as Rector of IBTS is always a crucial task – and at this time of change, even more so. We believe that Stuart brings to the position energy, vision and skills that will be significant in helping us develop the new patterns and relationships that will mark the life of IBTS in the next years.’

Speaking on behalf of the current IBTS community Acting Rector Dr Parush Parushev warmly welcomed the decision of the BoT to appoint Dr Blythe. ‘We feel he is already well known to us from his participation in the academic life of IBTS and from our personal contacts with him over recent years. We have full confidence in his academic expertise and in him fitting into the communal sprit of IBTS. We hope he will feel that IBTS is his natural academic home.’

The Revd Dr Jim Purves, friend, colleague, and Mission and Ministry Adviser to the Baptist Union of Scotland, described Stuart Blythe’s appointment as marking ‘an exciting, new stage in our service of the church throughout the European Baptist Federation and beyond. Stuart’s skills as pastor, theologian and educationalist are well suited to and will be ably exercised in leading both faculty and students in pursuing our IBTS mission of developing baptist values for effective mission into the 21st century.’

‘Stuart Blythe impressed us first of all as a person of strong Christian faith and Baptist conviction’ commented the Revd Tony Peck, a member of the Search Group and the General Secretary of the European Baptist Federation which owns IBTS. ‘Add to this his impressive academic background, his considerable experience in theological education, and his passion for the Gospel and the mission of God, and I believe we have someone who will build on the past achievements of IBTS whilst also being open to new and exciting possibilities for IBTS when it moves to Amsterdam. I also discern that he is someone who can gain the trust and confidence of Baptists in all parts of the EBF.’