On the 9th September 1513, a mighty Scottish army led by the then King James IV crossed the River Tweed at the town of Coldstream and entered England ruled by King Henry VIII. At that time Scotland was enjoying a period of growth, prosperity and educational advance with three universities already established (as opposed to two in the much larger England). James the IV was judged to be a good and wise King, the courts were working efficiently and life was peaceful enough between 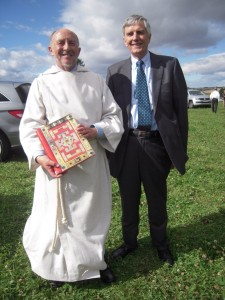 the highlands and the lowlands. There was a treaty of perpetual peace between the two nations.

Why James decided to invade England whilst King Henry VIII was in France besieging the French King is a subtle reflection. Ostensibly, the “auld alliance” between France and Scotland had demanded help for the besieged French King. No matter, in 1513 a superior Scottish army stood on the hillside of Flodden, just inside England, whilst the much smaller English Army of the North, under the Earl of Sussex, had hastened from Pontefract in  Yorkshire, to do battle.

The Scots, though superior, used all the wrong tactics, got bogged down and were massacred. In a little over four hours 14,000 young Scots lay dead on the Floddenhillside.

On 9 and 10 September 2013 people gathered at Flodden again to remember, to be reconciled, to reflect on the futility of war, then – and, indeed now, with prayers about Syria and other places of conflict. I was present, with many members of the Northumbria Community, to keep that solemn remembrance and seek reconciliation. Wit my Scottish mother and English father, such moments are always poignant for me.

A Roman Catholic Requiem Mass was held in an Anglican Church almost straddling the border, in which the Moderator of the Church of Scotland (Presbyterian) led the prayers and Baptist, Anglican, Presbyterian and Catholic clergy from both countries processed together. One lesson was read by the Duke of Norfolk, Earl Marshal and premier Duke of England, whose ancestor, the Earl of Sussex, had won the victory and been rewarded by a delighted Henry VIII with the Dukedom. Another by Angus Hay, leader of the clan Hay, whose clan had joined the battle and been slaughtered. At the end of the moving Mass a lone piper played the lament “Fleurs of the Forest”, composed a long time ago in memory of the tragedy.

In the afternoon on the Battlefield itself, I had a small part to play. Dressed as a monk I carried a facsimile of the famous illustrated Lindisfarne Gospels into the ceremony and read the beatitudes, pausing before reading the words “blessed are the peacemakers”.

It was moving to see the descendants of those from both sides who had led the armies into battle present on one platform. The Duke of Norfolk (English) sat next to the Earl of Home (Scottish). The Dean of Durham next to the Moderator of the Church of Scotland. (A poignant fact was that the blessed standard of St Cuthbert had been taken into battle from its usual resting place in Durham Cathedral to help ensure an English victory).

The Solemn Remembrance focused on the terrible death and destruction of the day five hundred years ago, but in the symbolic acts, in the address by Lady Steele, in the intercessions led by the Northumbria Community another note was sounded of the Gospel message of Peace and Reconciliation, not only recalling the past, but urgently needed in the present in our world of conflict and violence in which far too many people still die in unnecessary wars.