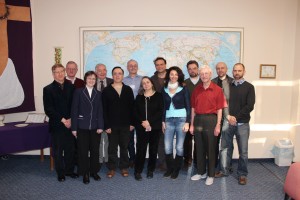 Since it was ‘a first’ of its kind it was appropriate that the issues ranged over a broad agenda but there was a clear thread and the purpose of the Seminar was never lost sight of.

Alec Gilmore set the scene with a presentation of how in 2011 the UK had celebrated the 400th Anniversary of the publication of the King James Version, based on two productions by the Royal Shakespeare Company, Howard Brenton’s Anne Boleyn and David Edgar’s Written on the Heart, focusing on some of the translation issues they raised to see how they chimed in with similar issues in other countries.

Since the Czech Republic was contemplating similar celebrations in 2013, Lydie Kucova (Biblical Studies Lecturer at the International Baptist Theological Seminary) followed with a survey of comparable translations, ancient and modern, from six countries in Central and Eastern Europe as a basis for further discussion.

With a strong Bulgarian and non-Christian upbringing Florentina Badalanova Geller (Professor, Freie Universität Berlin) shared her experience of working with people who had no experience or understanding of the Bible on the importance of Folk Translations and Vernacular Renderings and the implications for churches and other organisations at the planning stage.

Emanuel Contac (Lecturer, Theological Pentecostal Institute in Bucharest) recounted the story of the Bible in Romania and dealt in some depth with the present situation and the tensions that exist between the various churches.

John Elwolde, until recently a UBS Translation Consultant, with experience in Russian and kindred translations, picked up a number of issues raised in the Seminar and added more as he shared his experience of Bible translations, both general and particular, drawing attention to risky potholes and how to avoid them as well as making positive suggestions for those undertaking translations, both individual scholars and churches.

Five shorter papers addressed specific pieces of work which were then more fully explored in a series of inter-active workshops.

Juraj Bandy (Comenius University in Bratislava) dealt with the recent Slovak Ecumenical Bible; Jamie Grant (University of the Highlands and Islands) expounded his research on Czesław Miłosz’s Translation of the Psalms; Alexander Flek, after summarising Recent Bible Translation in the Czech Republic, recounted how a team of Czech translators (including Flek) had produced a new contemporary version of the Bible in Czech in 2009; Mervyn Richardson (University of Leiden) explained problems associated with Bible Translations and Hebrew Lexica encountered in his revision of Koehler-Baumgartner Hebrew and Aramaic Lexicon of the Old Testament, English Translation, 1994-2000; and Ventsislav Stoykov and Desislava Todorova reported on their creation of a Greek-Bulgarian Dictionary of the New Testament.

Alongside the actual problems of translation other issues raised were the need for clear guidelines before ever a translation begins and clarification on the role of any church or sponsoring body, the importance of identifying the target audience, the need for aids for translators, particularly satisfactory software geared to user experience rather than the predilections of software manufacturers, the value of churches working together rather than separately and some guidance on how to wean congregations from the old to the new.

Overall, the Seminar established a new network of relationships and began to build an agenda which could go on long into the future.