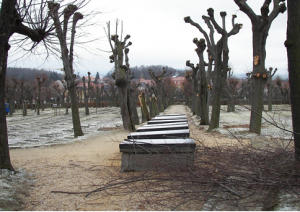 I recently visited Herrnhut in eastern Saxony, home to the world-wide Moravian Church. This church, earlier known as the Unitas Fratrum (Unity of the Brethren) places its anticedents in the proto-reformation concerns of Jan Hus in 14th century Bohemia. After the martyrdom of Hus by the Catholic authorities at the Council of Constance, the Unitas Fratrum came into being to continue his reforming concerns of sharing the eucharist in both kinds, the liturgy in the vernacular and a move away from priestly celibacy.

Following the Battle of Bila Hora in 1620 (see earlier post), the suppression of such protestant groups continued by the Catholic Emperor and King of Bohemia. In 1722 a small group arrived on the state of Count Nikolaus Ludwig von Zinzendorf, who protected them and allowed them to build a new town, Herrnhut, on his lands. 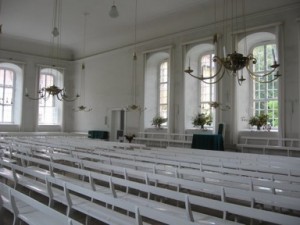 It was fascinating to visit the “Congregational Hall” in the centre of the town, painted white inside with white benches and a small table covered with a green cloth from which the liturgy is directed. In the past brothers sat on one side of the chapel and sisters on the other, but today the seating is not so restricted. Around the Congregational Hall are other buildings, a centre for Diaconal work, residences for single brothers, sisters and widows and family homes. There is an excellent museum showing Moravian interior furnishings of the 1800’s , a gymnasium named after Zinzendorf and an educational centre named after Bishop Jan Amos Komenius (1592-1670), the famous Christian educator and important spiritual thinker (author of the fascinating “Labyrinth of the World and the Paradise of the Heart”).

Between Herrnhut and Zinzendrof’s now neglected Manor house at Berthelsdorf is the Moravian cemetery. Sitting on a hillside where gravestones are all laid flat, again brothers in one section of the cemetery and sisters in another with no family graves. Stark in its simplicity, but quite beautiful in its setting.

Here in Herrnhut is the home of the Loesung, or Daily Watchword. They are exponents of the Agape meal, or “love feast”. There is also a new modern facility making the Herrnhuter Stern, the Advent star in geometrical form a rhombicuboctahedron, which adorns many homes in Europe during Advent and Christmas and a very large version of which always hangs in the tower of the restored Frauenkirche in Dresden. It was the Fetter Lane, London, Moravian congregation to which the Anglican priest, John Wesley went and where his heart was “strangely warmed”.

Herrnhut on a crisp November day had a message in its simple style of an important way of following Jesus in community, with a basic liturgy of the Word, a common life and a missionary spirit.

One of the smaller Christian World communions with under one million members around the globe, at Herrnhut I gave thanks to God for their existence and for the gifts of faith they have freely shared with the wider Christian family.