That’s what we’re supposed to be as disciples of Jesus, and most of the time we consent to it mentally. Or sing about it: “We’re a travelling, wandering race, we’re the people of God” Loving the world just as God does, but never too set to ignore a fresh call of God, and a fresh task. 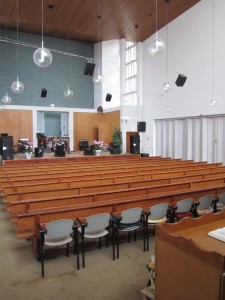 Our real convictions about being a travelling race, however, come to test when the idea of a significant move becomes more than a theological idea. As you know, that’s exactly what is happening with IBTS at the moment: leaving, very reluctantly, our wonderful ‘castle’ and starting life in a very different setting in West Amsterdam. For all those involved, it is a journey of change – including the local church whose 1960s building needs to be significantly remodelled in order to become a new ‘tent’ not only for IBTS, but also the Dutch Baptist Union and the Dutch Baptist Seminary. So yesterday involved a meeting of all these parties for whom the ‘Herdenkingskerk’ – the Baptist ‘church of rememberance’ – will become a new home.

As you can see, it is an exciting, if not straightforward, challenge. How to make the existing space welcoming, warm, and sufficiently flexible to serve the varied needs of the yearly ebbs and flows requires quite a bit of thinking, discussing, and dreaming. I was really encouraged by the choice of the architects made by the Dutch Baptists – they were eager to listen and understand how we all ‘tick’ and relate, and open to dream together and explore different options in order to find the best way forward. I’ve always been interested in the connections between spirituality and environment, including the relationship between the interior setting and church/seminary/intentional community life, so it’s exciting to be a part of such work.

And then moving from the interior to exterior, there’s another reminder of the world we’re journeying in. Standing right at the main doorstep of the church, accross the street you see an ‘Ummah Supermarkt’. That ummah – a Muslim community centered around the idea of faithfulness to Islam – is a strong presence in this bustling European city where IBTS is about to make a home, as it is in many other parts of Europe already. Quite a challenge before us, and I’m grateful for some thinking we have already been able to make through some conferences and a module exploring the way of living among the people of Muslim, as well as other, faiths. But that’s certainly only a beginning.

Next time I’m at Herdenkingskerk and have a little more time, I’ll make sure to visit the Ummah Supermarkt, and to explore other features of the vicinity. 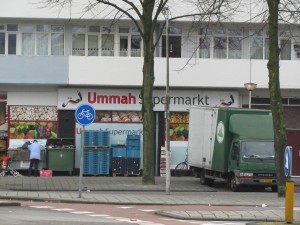 “Don’t get too set in your ways,

Each step is only a phase,