The 22 Tram, often used by tourists as an easy way to the Hrad, or castle area of Prague, has as its ultimate destination, Bílá Hora, the White Mountain. It was here on 8 November 1620 that an army of 30,000 Bohemians and mercenaries under the command of Christian of Anhalt-Bernberg, anxious to defend the Hussite and evangelical credentials of the Czech lands, were routed by an Imperial and Spanish Army led by the Counts of Bucquoy and of Tilly intent on reimposing a staunch Catholicism on the Bohemian and Moravian people. It was the end of the Bohemian phase of the Thirty Years War and led, in due course, to the Holy Roman Emperor, Ferdinand II, driving the Anabaptists out of Moravia into Slovakia, Transylvania and Ukraine. For we in the evangelical gathering churches family (Czech Brethren, Baptists, evangelicals of various flavours) it is a sad day remembered with anguish. 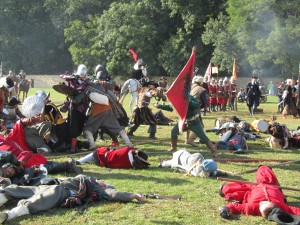 Nevertheless, on Sunday 23 September 2012 hundreds of people gathered on the plain near the White Mountain to see a re-enactment of the Battle and it was good fun – with sausages, potato pancakes and the inevitable plentiful supply of Czech beer and lemonade, families of all ages, most of them (statistically) not professing any Christian faith, gathered to see the full battle re-enacted with many loud bangs, cavalry charges and all to give us a fun afternoon outing.

In this highly secular society there was one moving point. The two armies were drawn up facing each other, with regiments, guns and all as they were in November 1620. Then, the field and the crowd came to a pause as on the Bohemian side a Protestant ‘pastor’ came forward to pray for the Bohemian army, recite the Lord’s Prayer and deliver the Aaronic blessing on the troops.

No such similar event was re-enacted on Sunday in respect of the Imperial Catholic Army, though following behind the cavalry and foot soldiers were monks to deliver the last rites to the dying. 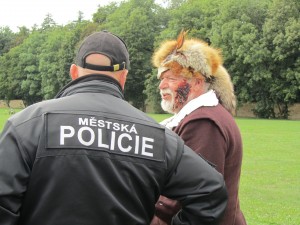 The crowd went back to eating their sausages and potato pancakes and battle commenced with loud bangs, soldiers dressed up with bandages and exploding packs of mock blood and all to the enjoyment of the crowd, but I wonder if any others present amongst the watching masses reflected on the fact that Bohemia, from Jan Hus (died 1415) to the White Mountain (1620), had been a place firstly of the Proto-Reformation, then full blooded evangelical faith only to have it so violently suppressed after 1620 to the point where the modern, secular Czech Republic is one of the least Christianised state in the European Union.