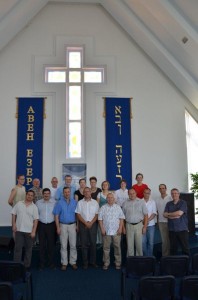 The Consortium of European Baptist Theological Schools (CEBTS) is a great organisation I am proud to have belonged to since its inception in 2001.

It did away, at a stroke, with the “old” paternalistic approach of the EBF Theological Assistance Group which assumed institutions in the “west” could help those in the “east” and has created a network of equal partners supporting one another in a common endeavour to provide quality theological education throughout Europe and the Middle East.  It was a bold move to get rid of Tag in 2001and develop CEBTS,  as many wanted the old way of doing things and some beyond Europe criticised this fresh and new networking approach.

For me, that new approach was fully vindicated when we gathered in the excellent premises of the Odessa Baptist Theological Seminary in the Ukraine for our Seventh CEBTS Forum last week. Odessa has as special place in our affections because it was chosen as the site for the first Russian language seminary after the collapse of the Imperial Soviet regime in the 1990s and the money long held onto by the BWA was released to erect the first stage of their seminary building project.

Representatives of thirteen member bodies of CEBTS gathered in Odessa, for for the 7th Forum and conference of CEBTS under the theme “Going in and out. Spirituality and Mission”. We were hosted in a grand fashion by our good friend President Volodymyr Shemchyshyn and the Academic Dean, Olexsandr Geychenko. We rejoiced in the splendour of a wide range of culinary delights and a hospitality which would be hard to match in western Europe and the Middle East. 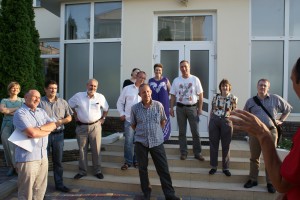 Our plenary sessions included papers on Spirituality in Slavic, Latin and North Western Europe contexts. We explored a Missionary Ecclesiology for the 21st Century, the relationship between Structures of the Church and Spirituality, the Psalms as a source of Spirituality and our Spiritual Journey as Theological Teachers. We had a case study in missionary transformation from the North Caucasus region of Russia and we looked enthusiastically at an overall examination of church planting work across central and eastern Europe.

The quality of the papers and discussion was excellent! Be sure to be at the 2014 Forum!