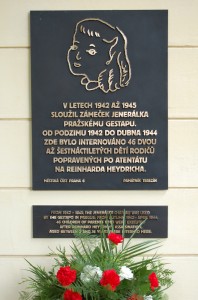 Many of you know that Jenerálka Chateau was used by Prague Gestapo during World War II., and among other functions, they used this place to intern 46 children of parents arrested or killed after the Reinhard Heydrich assassination. These kids, aged 2 – 16 years, spent nearly 2 years here at Jenerálka.

On Monday, a tablet commemorating stories of these kids was officially unveiled, with some of the „children“ actually present. They are now in their seventies or even eighties, but they were very excited about the chance to see the place of their childhood again. We went for a little tour and it brought up so many memories… What we know as the Library, they remember as dinning hall where they played theatre and repaired their worn socks and clothes again and again. Where we have classrooms and offices, they had rooms where five or more of them slept, older taking care of younger. They only had cold water, they experienced mice and lice, they could not attend a school. But they also recalled the fun they had here, being a group of kids … Jumping on their straw-mattresses until the room was so full of dust they could not see each other. Laughing when creating impossible virtual punishments for their German governess. And the theatre… all of them, even those who were 3 by that time, can remember the great performing skills of their friends.

It was such a pleasure to have these people here, to listen to their stories and to remind ourselves of history of the area. And it is very important that the authorities finally decided to place a memorial here, to make sure that the stories will not be forgotten.

The tablet has been installed to X building, have a look next time you pass.