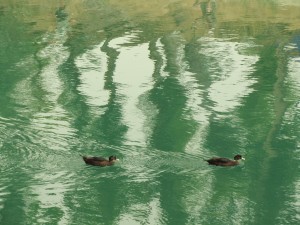 John 1. 28 tells us John the Baptist was baptizing at “Bethany beyond the Jordan” (1.28) and it is to there that Jesus came to be baptized. Archeologists and Biblical scholars have identified that site as in the Kingdom of Jordan (not the false claims made on the other bank) and this site, now preserved in a natural form (unlike most of the sites elsewhere in the Holy Land) has become a placed visited by those who want to see the supposed cave of John the Baptist, the hill where Elijah was taken up into heaven and, of course, the spot where the early church believed Jesus was baptized.

The Jordanian authorities try to keep it as a wilderness, with the reeds blowing in the wind. It has a naturalness about it which does promote a sense of worship. However, sadly, the churches have pressed the Jordanian government to allow buildings to be erected nearby. Prof. Dr. H.R.H. Prince Ghazi bin Muhammad bin Talal, a renowned Muslim scholar (one of the originators of the Common Word dialogue between Muslims and Christians) encouraged the churches to consider having one Christian building which all could share. That, it seems, is not possible for ecumenical relations have not advanced so much. Today, denominations are rushing to erect their own tabernacles at the site – Armenian Apostolic, Orthodox, Roman Catholic, Russian Orthodox – all on a grand scale. This is disappointing. Apparently we Baptists have our own plot of land on the banks of the Jordan, but perhaps appropriately, there is only a simple, natural, shelter and not even a sign to say we are standing on the property of the Baptist World Alliance. This has a Gospel simplicity about it, which commends the place to me.