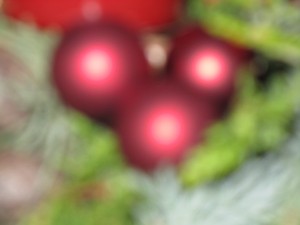 We are now into the four week period of the year set aside as a preparation for the celebration of the incarnation, or the nativity. In the West Advent begins on the fourth Sunday before Christmas (this year Sunday 27 November). The name is derived from the Latin root meaning ‘coming’ or ‘arrival’.

The early western church from the 6th century onwards had a period of six weeks of fasting and penitence before Christmas. The reduction to four weeks was a gradual development, but is now almost universally accepted. Today, the accent of the Advent season is on ‘getting ready’ for the coming of Christ – at Bethlehem, into our prepared lives and the final coming of Christ in glory. Advent seems to be getting more popular – even amongst Baptists! In North America this year Advent was hailed with “Black Friday” when supposedly everyone goes on a mad post-Thanksgiving, pre-Christmas shopping spree.

In central Europe things feel somewhat different this year. We are in troublesome economic and political times. Unemployment rises, the world of banking still seems unstable, the borders of “fortress Europe” are being tightened and the talk everywhere is of austerity. So it seems a proper time to reflect on the deep Advent themes. This past Sunday (Advent 1) the Revised Common Lectionary reading was Isaiah 64 with the returned Babylonian exiles having to re-assess their dismal state – not all had come back and they had not been able to rebuild Jerusalem. The expectation of a highway through the desert of Isaiah 40 now had to be reflected on, because the reality in Zion was not as they had been promised. Perhaps rather like us in these Bohemian lands re-assessing the legacy of the collapse of communism twenty years ago? Then, there was a bright hoped-for future of democracy, economic development, and open borders. Now, Czechs are looking again at what has happened and experience something else. Disillusionment has set in. This Advent, in the midst of difficulty in the world, the anticipated failure of the Climate Summit in South Africa, the instability of the Eurozone, massive famine in east Africa and all, we need the realism of Isaiah 64 and the call for faithful people to have hope, to look into the gloom and darkness for the Christ light. 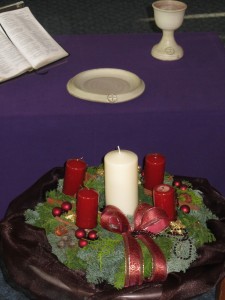 So, as we set up our Advent wreath of live seasonal greenery with four strongly coloured candles and with a larger central white candle representing the birth of Christ which is lit at the Christmas Eve Eucharist, or on Christmas morning, let us follow Isaiah 64 in offering confession of the failings of our world and of ourselves as we wait, in hope, for the coming reign of Christ in Bethlehem, in our own community setting and, finally, at the end of time. Maranatha – Come, Lord Jesus, come!