On a recent trip across Europe, from one weekend of ministry in Dijon, France to another in Lanckorona, Poland, I took the opportunity to visit some of the sites associated with the Anabaptists in Zurich, Innsbruck, Vienna and in Moravia and Slovakia. 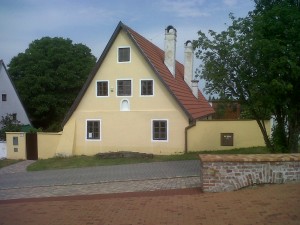 In particular, visiting the Anabaptist Quarter (Habánsky Dvor) in Velke Levare, north of Malacky in Western Slovakia, a beautifully preserved example of a Hutterite bruderhof dating back to 1588, I was amazed to be introduced to a descendant of a Hutterite (Habáni) family in the village there, still living in the neighbourhood and looking after the (now Roman Catholic) chapel of the original settlement. Mr Kleinerdle’s German name marks him out from his Slovak neighbours, and he is one of a number of families who, whilst converting to Catholicism in the eighteenth century, kept many of their Hutterite traditions, including the council of elders and a school there until into the twentieth century.

In speaking to friends in the Catholic Communities I was visiting in Bratislava, I was surprised how many folks were also claiming to have ‘Habáni’ ancestors. One woman in a small group I visited still has family in Sobotište, which some from IBTS have visited to see the Anabaptist house there, and a friend in the Roman Catholic Calvary Community, in Bratislava tells me that her mother’s family, also from Sobotište, had the German surname ‘Baumgartner’, one common around Lucerne, whence the first settlers possibly came. 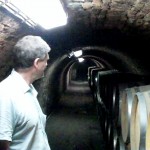 I was also delighted, crossing over the border into Czech Republic, to get a chance to visit the original seventeenth century vaults of the ‘Habánske Sklepy’ (Anabaptist Cellars) winemakers at Velke Bilovice, established by the Anabaptists in 1614. This is definitely worth a viewing, if you are in the area, and I have also come home with a bottle of their late-gathered 2009 Chardonnay to sample into the bargain!