Lingua franca “an additionally acquired language system which serves as a common means of communication for speakers of different first languages.”

In the period of one week I have had three experiences with a lingua franca. Perhaps the most meaningful was yesterday at the Agape Meal of our Sarka Valley Community Church.  A group of over 30 Burmese refugees recently settled here in the Czech Republic attended church today.  Since most Burmese Christians are from a Baptist background, they were joining us today in order to be with a group of fellow believers.  The service was joyous as we experienced the wonder of worshiping God together!  A young Burmese woman who regularly attends SVCC interpreted the service into Burmese.  However, she told us that in this small group there were people who spoke five (5) different languages and that Burma has over 100 different language groups.  So even with her interpreting, some of the group could not understand.  It seemed to matter very little as we all were drawn together in music and prayers. Later as we ate our meal and talked I asked if anyone among the group spoke Chinese since Burma borders China.

I knew this well since in the 1940’s my dad was with the first group of American soldiers who drove from India across Burma and then up the Burma Road into Kunming, China to join in the air war effort against Japan.

I had stood on the Kunming end of that road myself in 1986 and looked into Burma. 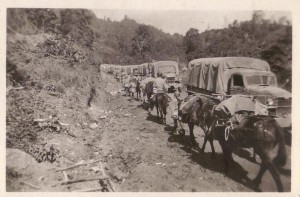 The interpreter pointed to one young man and said, “I think he might.”  I walked over to him and asked, “Ni hui bu hui shou putong hua?”  He gave me an odd look, I repeated my question and he answered.  “Hui.  Wo hui shuo yi diar.”  Thus my “Can you speak Mandarin?’ had been answered with ‘I can speak a little.”  We then established who his wife was and his son and that he had only the one child.  I learned he is a massage therapist but will need to get a certificate here to practice.  He learned where I had lived in China and other tiny things.  But we had broken the barrier – I had no Burmese. He had no English.  We met in a third language and shared something of our lives. I then learned that another of the men, with the same professional skills, also spoke Mandarin. Now we had not only worshiped together but we were drawn closer by sharing words.

Earlier this same week I spent the night in the sleeping car of a train with two women. One was Australian and the other Russian.  The Australian spoke English. The Russian – French, German, Italian, Russian and Spanish.  I was the one in between in this situation as the Russian and I spoke Spanish and the Australian got what I could give her of our conversation and I gave the Russian what I could of the Australian’s conversation.  Neither my Spanish nor my Chinese is fluent but with ‘just enough’ fluency miracles can happen.  Even earlier in the week my enjoyment of my time in Spain was enlarged when someone I needed to speak to in Spain could speak at least a little English.

Thank God for a most interesting week in my life and for reminding me again how wonderful it is to communicate with the people who surround me. Life is not meant to be lived alone.  Community is all important and it takes communication to make a community.