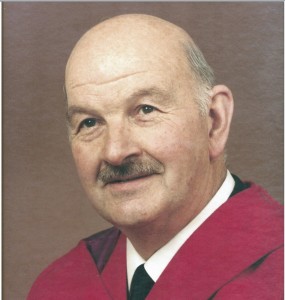 DSR belonged to that generation of young men who entered University to be formed for ministry and time and finance was on their side. His academic achievements are manifold MA BD Glasgow, MA MLitt Oxford,  Honorary DDs Glasgow and McMaster, DLitt Glasgow. He was an accomplished scholar and writer on Jewish apocalyptic. Well into retirement he came to IBTS in Prague in 2000 to help us celebrate 50 years of our European Seminary he cared about and supported and one special lecture was by that famous Johanine scholar, Gerry Borchert. Gerry dared to lecture on John the Divine’s Revelation with DSR sat in the front row. The normally sedate after lecture questions and answers turned into an amazing dialogue between two of our age’s leading Biblical scholars. DSR at 83 was bright and sparkling and up-to-date and gave Gerry a very good critique.

DSR was a great theological educator. He was the power house in bringing together Rawdon and Manchester Baptist Colleges in what we now know as the Northern Baptist Learning community, a great partner of IBTS.

DSR was a great Baptist statesman serving here as Co-Principal with an ailing Ken Dykes may not have been simple, but he did it, before being asked to serve in succession to E A Payne as BUGB General Secretary. A post he filled with aplomb. However, it was beyond BUGB where he is perhaps most warmly remembered. As President of the EBF, getting permission to visit countries and see Baptist leaders who had little contact with the world family. The Angelov family in Bulgaria. The Baptist leaders in Moscow. Working with Jimmy Carter for the release of Georgi Vins, the leader of the unregistered churches, whilst at the same time maintaining the confidence of the leadership of the All Union Council. Perhaps, in the opinion of this blogger, his greatest achievement was founding Eurolit with our IBTS colleague, Alec Gilmore and getting books and reading material to the pastors in the communist east. This is an abiding legacy of DSR –I have been in countless homes in the Ukraine, Russia, the Baltic States where pastors give pride of place to the William Barclay commentaries which DSR raised the funds for and oversaw the translation of. As our colleague Dr Toivo Pilli comments,

“My first New Testament commentary that I used in my ministry was William Barclay’s commentary in Russian, a set of volumes with orange covers. This was a very helpful tool for a young pastor of 25 who had no systematic theological education, as in Soviet system it was not possible to have systematic ministerial preparation. I used the volumes for many years as one of the main tools in my sermon preparation. Only later I learned that David Russell was one of the initiators and organisers behind this project. I am grateful for his vision. And today, when David has passed away, I am also thankful for the opportunity to meet him a year ago in Bristol, and briefly greet him in person.”

For many of us who knew him, his impish sense of humour was much valued. Several times in the 80’s, David and Marion came to our home in Rawdon and we entertained them. Sunday dinner was always a great laugh – his stories were endless. He could reduce the British Baptist Union Council to fits of laughter – with remarks, often self-deprecating, but highly amusing, to get himself out of some scrape when as General Secretary he was in the hot seat.

His 94th birthday would have been on 21 November. We thank God for every good memory of him.