For over a year now, IBTS, alongside other three partners from the Czech Republic, Bulgaria, Northern Ireland and Lithuania has been involved in a project called SICRIE, sponsored by the EU’s Grundvig programme. The partners meet four times during the course of the project. The first meeting took place in Prague last November; another one in Northern Ireland in May of this year; and yesterday, together with other colleagues, I have returned from the third which took us to Sofia, Bulgaria. 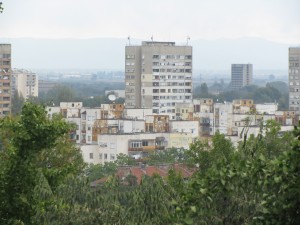 Plovdiv, where I went with a few others, sounds like fun; and fun it was, of course, to see its 2nd century AD amphitheatre dug out just a few decades ago, the the Roman stadium, or the Djumaya mosque. But what has made the greatest impact on all of us was a walk through a Turkish-speaking Roma district – really, a ghetto. We were welcomed there by a German family of “real” missionaries – you know, the ones who actually live, rather than only serve, there, who have their children marrying the locals (yes, including someone from the ghetto itself)… “Real” missionaries who asked us not to take pictures because they don’t want the inhabitants to feel like in a zoo. That by itself spoke worlds about the respect we were expected to have for those people, and yet also a sense of realism of the hardships one should expect to encounter when settling in such a challenging setting. 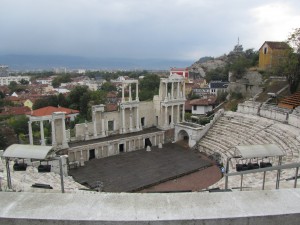 The poverty we saw there, of course, was heart-wrenching. The soaring levels of unemployment, the meagre numbers of the children who go to school, the dirt in the streets, the shacks which stand for people’s homes…. and the growing presence of radical Islam which speaks into the poverty and marginalization of the people ignored and disregarded by almost everybody. Yet at the same time, there is also the fact that these seem to be people happier than many of us  – people who do not have a guaranteed tomorrow and therefore live this day to its fullest; people who sing and dance and laugh and cry and hardly ever commit suicides.

Plenty of things to think about, quietly and aloud – as we did.

It also made me want to sing praises to the EU putting its money into programmes like this one. I may dislike its machine of bureaucracy and the slowness of its movements, but at least it takes seriously the power of learning by engagement and  on the grassroots level.  Although it was important to sit and discuss things in a room on Saturday, it was so meaningful only because of the time spent previously sharing in an important experience together. And it was not only  the visits to places like that Turkish-speaking Roma distric, but also because of simply attending to the amazing history and culture of the Bulgarian people – streets, museums, churches, even shops… Done together, in such an unlikely group of us coming from four different corners of Europe (some of us without barely any previous experience of the world outside our own countries), prepared us to share things with each other and to stumble upon insights born out of the intersections of these cultural, intellectual, emotional, spiritual and fun experiences – amazingly so, all packed into less than three days.

But of course, perhaps we shouldn’t be surprised; this is how children learn. Too bad we – especially those involved in higher education – often forget it…