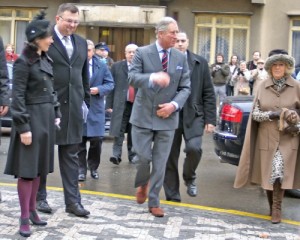 HRH Prince Charles and the Duchess of Cornwall have just completed a nine day official visit in Central Europe, spending three of the days in the Czech Republic. They visited Masaryk University in Brno where Prince Charles was presented with a special medal for his contribution to concerns about the environment (I wonder if the University did that as a deliberate snub to climate change and environment sceptic President Vaclav Klaus?).

They also went to worship on Sunday at St Clements Anglican congregation, where our friend, the Revd Ricky Yates, had to convince over-jealous Czech police to let his own congregation into the church (you can read more about on his blog.

On Monday evening leaders of the British expatriate community gathered in the Embassy to meet the Prince and Duchess. As on his previous visit some years ago, we were grouped into small numbers for more intimate meetings with the Prince. Some anxiety at first as the leaders of the Czech Salvation Army, British officers, appeared to have been placed with the Czech military hierarchy, but they soon got in the right group.

It was an informal and pleasant evening and it was good to meet the Prince again, who is Chancellor of the University of Wales, validators of IBTS degrees. As always he was interested in the activities of all of us and suitably supportive in his comments.

I am forced to smile by Czech formality though. Brits present were styled by a first name and family name on our badges. I couldn’t help noticing that several Czech academics present had insisted on their badges referring to their academic rank and highest degree – Professor PhD etc! The supposedly class-stratored society all equal on our badges and the supposedly republican classless society insisting on all rights and titles! Interesting….