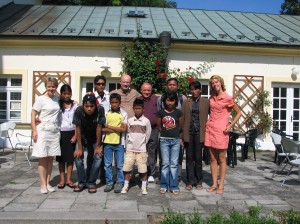 Burma is never far away from the world news – even with our ‘first world’s’ egecentrism, the constant and cruel violations of the human rights there by the country’s military junta bring it to our TV screens regularly enough. Just the other week, in the Baptist World Alliance Annual Gathering, we were praying for the situation now that Aung San Suu Kyi, has been once again sentenced for house arrest in an attempt to trample her movement of peaceful resistance.

But then a week or so ago, we’ve got a call – from the Czech Ministry of the Interior! (You can imagine various thoughts running through the Rector’s mind!)

Pan Petr Novak, – you know, the equivalent of “John Smith” in England, the Head of the Unit for Integration of Foreigners and Refugees, speaking. It appears the Czech Republic has received a handful of Burmese refugee families as a part of the EU agreement. “All of them,” pan Novak said, “are Baptists!”

Whereas the rest of the families are in Moravia, one has been placed near Prague, and thus IBTS is requested to give them a tour through campus so that they could meet some fellow Baptists. The time has been given – Saturday August 15th, 14.00.

They did arrive, and even a little earlier than expected! It turned out to be a family of 8 from the Chin region in Burma – father, mother, and 6 kids; accompanied by Ms Soe, the Director of the Burma Centre in Prague (who helped out with translation), and p. Novak himself. Lovely people – and a fascinating encounter with folk from such a different culture who have been denied the right to lead their traditional life in their motherland and now trying to integrate into the Czech society. They have been here for 8 months and are doing their best in learning Czech (so some bits and pieces of our conversations with the kids was in Czech), but also speaking some words of English. They’ve just been to the Prague Zoo and after the meeting with us, were heading towards the Prague castle – a busy programme.

We sat in our Guest Lounge for a while, sharing some coffee, juice, sweets and stories, before taking a walk through the campus. The father of the family told a little bit of their own situation.  With the fresh memories of Amsterdam400 celebrating ‘Baptist beginnings’, it was heart-warming for me (Parush) to hear the story of another piece of Baptist beginnings in that remote area of Burma, related to the missionary activities Adoniram Judson and the American Baptist Churches. In Amsterdam, we have heard of persecuted Baptists in different parts of the world, but looking at the faces of these refugees, more of the human dimension of the story of the persecuted church emerged as we listened to their account of life in refugee camps (they came via a refugee camp in Malaysia) and as God’s people in a foreign land.

P. Novak turned out to be a great facilitator of the discussion as well. At one point, he asked whether we could hear the Lord’s prayer in Chin language, which we did when we went to the Chapel – a moving chant. Then he played a few lines from Smetana, myself (Lina) a song based on the Lithuanian folk tune, and one of the kids played a Chin Christian song. I (Lina) just wish all occasions like this could be somehow imprinted on the Map of the World which hangs there in the Chapel and which we use so often to pray for the world and its different countries.

After the group photo was taken, once more all parties expressed hope that this would not be the last meeting. This indeed felt more than just politeness. It would be so good for our students to see and hear first-hand the stories of these refugee brothers and sisters, to share something together from our common identity in Christ, and to become aware of this important element in the mosaic of contemporary Europe.