Happy New Year to all the readers!..

Crisis or no crisis, Prague was a popular spot to greet this New Year. Our hotel was swirming with guests from various countries; all Prague seemed to be full  with sounds of different languages – some louder than others! But those in our hotel started to leave soon after the start of 2009, so when in the evening of January the first a group of us set off for the Old Town, I expected to see Prague relatively quiet, recovering from the tourist onslaught.

Instead, the bus and then the metro were absolutely packed with regular ‘Praguers’. Staromestska metro stop was filled to its capacity and then beyond, with the voice over the loudspeaker pleading folk to use other means to move around the city.

Then, in these crowds, our company managed to meet a family from our church!

All of us were going to see the traditional New Year’s Day fireworks – but I never imagined there would be SO many people! Families with children, older people, youngsters, an occasional tourist – a sort of alternative company to that which must have gathered for midnight New Year’s fireworks – were flooding the river bank in search for the best view of the spectacle. The colours of the Czech flag – white, red and blue – at the start and the end of the performance symbolised the country’s EU presidency which it took from France yesterday. (I realised this only after reading it on the news – the message beyond the colours, that is, not the presidency bit!) 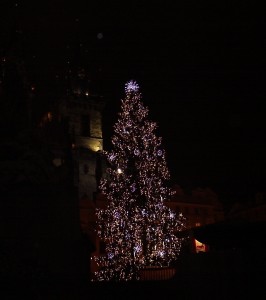 Let us hope the next six months will bring something good for the Czech Republic and for the EU as it attempts to deal with the economic concerns and the consequences of the current violence in the Middle East.

The moto of the presidency is “Europe without Barriers”. May indeed some new barriers be destroyed. But it won’t happen until the ‘normal’ people take it on;  politicians and policies won’t achieve it on their own. Let us hope that communities of the followers of Jesus will be engaged in this task, setting the example of peacemaking and growth through difference.