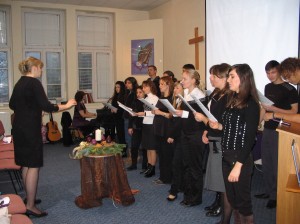 We’re now into the third week of Advent, which for many in the IBTS community will actually be the last one: Christmas break starts this Friday and then many of the staff and students go home, where in a number of cases Advent isn’t celebrated at all.

It’s always interesting to observe various reactions to this time of waiting. We tried hard to hold off the ‘happy glittery Christmas mood’ and be serious about the preparation time and what it involves – alert waiting and active hoping. We’ve done quite well, I thought, even though yesterday in our SVCC all-age service we finally got into Christmas carols – this is our only chance before the community disperses itself!

One of the threads we seem to have come back several times during this Advent is the parallel between the times of John the Baptiser and ours. He is a character to which we’re used to, but that was not so for the people in his day. Yes, many came to him – especially those yearning for a new start, those ready to testify their readiness for the coming Kingdom of God – yet not so many of the nice religious people. Those knew better; they knew, from how they read the Scripture, that when the day of the Lord approaches, he – the Lord – will appear in the Temple, and that’s where they were focused in looking for him. Of course; that was the most logical place for him to appear. Not in the wilderness. Or in Nazareth, for that matter.

Expectations, arising from what we think we surely know, are a powerful thing. We may be looking for God’s coming and fail to see it when it actually takes place. So I’m wondering again, with the words of John the Baptiser still ringing in my ears, whether we’ll recognise the appearance of the One like the Son of Man. I really hope and pray we will.