IBTS Environment Month is drawing to a close, the last activity being this week’s time for campus cleaning which we have (tongue-in-cheek) termed ‘subotnik,’ alluding to the legacy of the communist times when people were ‘forcefully volunteering’ to work (for free) for the betterment of the environment. The term, I think, is unknown in the English-speaking word except as a surname, but here’s an interesting description in German. Well, we hope that our volunteering here won’t be forced! The idea is that the time offered for cleaning will be the folk’s free contribution of their work hours which we can then direct to some good purpose (via Christian Aid) for some community in the Majority World. Making an explicit link between environmental issues and the real extent of poverty is especially important given that those of us coming from Eastern Europe often carry poverty complex with us which has huge behavioural implications.

This Environment Month has been especially good. I found this year’s students to be one of the most  engaging groups. Some of the questions about our faithfulness as stewards have been profound indeed and they offer hope, I think to all of us at IBTS for whom environmental matters are an integral part of our Christian witness, that things (and thinking!) are beginning to change, even in Eastern Europe.

I’ve also just completed reading a book which has recently arrived to our Library. Some no doubt have found the author to be a disturbing voice; for me, however, she is a prophetic one which the church needs to hear. This is Sallie McFague and her newest book on A New Climate for Theology: God, the World, and Global Warming (Minneapolis: Fortress Press, 2008). 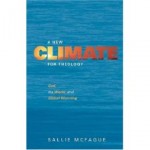 McFague’s concern arises from the urgency of the crisis of the global warming. This urgency, felt throughout the book, at times spills into sermonic style which, I guess, might weeken the effect of the argument on a more sceptical reader, but on the other hand is quite understandable given the acuteness of the situation.

McFague echoes something that is very much at the core of how we understand the task of theology here at IBTS, insisting that theology can be started from ethics, rather than from the systematisation of logically expounded theological propositions. If theology is first and foremost about life, says McFague, then any talk about God – “God-talk” – by God’s creatures has (or needs to have!) praise as its primary purpose.

McFague takes some French deconstructionsists (specifically Derrida) as her conversant partners and finds them helpful in showing the issues in a new light, yet also expresses her reservations as to the extent of their effect: “An incarnational theology is suspicious of deconstruction’s privileging of words over body, text over nature, interpretation over experience” (114). Reviewing her earlier thoughts, she proposes the model of thinking about God which is based on the metaphor of the world as God’s body: “We do not know God or see God. What we know and see is what Moses saw – the “back” of God, the body of God, which is the world” (106).

If we cannot find transcendent in the world, in its beauty and its suffering, then for us bodily, earthy creatures it is probably not to be found at all. Finding transcendence in and . . . through the earth means paying attention to others: the ethical rests on the aesthetic, the prior moment of realizing that something outside of oneself is real. Only then is one capable of the kenotic action, the retreat of one’s relentless ego, to allow the glory of God and the need of the neighbor to full oneself. The aesthetic is the recognition of otherness; the ethical is the practice of self-denial necessary so that others – God and neighbor – may be praised and served (113).

McFague is right about climate change: it is a theological issue. Ecological theology – not as yet another ideology, but as a humble living in respect to God’s gifts and in faithfulnes to our calling as humans – is a something we deeply miss and urgently need. And yet, it is much easier being talked about than lived, even by the ‘preachers of ecology.’ Thus we are back with a remark which is often recalled here at IBTS:  theology is worth (only) as much as it is lived out. Words are actions of a kind, yet much more is needed.  With  trepidation, I wonder how much I myself – and we as community – will live it out in these economically disturbing times…