Well, what a difference a word can make. In my investigations of the Anabaptists in Sobotište in the seventeenth century I had always been looking for reference to the Haban, as they were usually called (probably from ‘haushaben’). However, on our recent visit to the Anabaptist house in Sobotište we were able to go into a museum where we were given literature that consistently referred to the ‘Hutterites’ in the area (Anabaptists named after Jacob Hutter). I have studied the Hutterites and their interest in communal living, but some digging around in the last day or two, especially reading what Robert Friedmann (the Mennonite historian) has written, revealed a story which I found absolutely fascinating.

A record shows that there was a determined Hutterite believer living in Sobotište in the 1770s – by which time all the main leaders in the area who had been Anabaptists had been forcibly converted to Catholicism. This man was Jacob Walter, and in 1782 he travelled from Sobotište to the Ukraine via Herrnhut, Germany, the key Moravian centre. At Herrnhut he received some help and support. It seems that the Moravians there considered the Hutterites as related to the old Czech Unitas Fratrum. 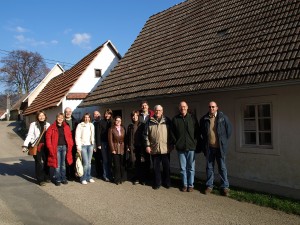 Because of my interest in the Moravians – I have written about their spirituality and their mission – this was a significant reference for me. There was more excitement to come. Jacob Walter went on to Vishenka (Wischenka), Ukraine, where Hutterites had settled. Then he came back to Sobotište and, with the help of some others from the Ukraine, eleven Hutterite families (56 individuals) from Sobotište managed to escape to the Ukraine. From then on all the former Hutterites in Sobotište became Catholic. However, this was not the end of the Moravian contact. Hutterites living in Radichev in the Ukraine and Moravians living in Sarepta on the Volga River had contact over the period 1797 to 1811. The Hutterite leader was Johannes Waldner and the Moravian pastor was Johann Wiegand.

Johannes Wiegand spoke of the Hutterites as those (like the Moravians) who ‘consider as the sole foundation of all righteousness and salvation the merit of Jesus Christ’. But he was sorry about the lack of missionary spirit among the Hutterites – a big change from their early years. It is interesting that Johannes Waldner, the Hutterite leader, praised the writings of the early, very influential Moravian theologian, August Spangenberg. In 1803 Wiegand asked Herrnhut for relief aid for the Hutterites. He hoped they would draw even closer together.

It seems that the archives at Herrnhut, which were visited recently by some of the IBTS community, still have some of the gifts received by Moravians from the Hutterite leader, Johannes Walder, including the form for a service of believer’s baptism (50 pages), two sermons to be preached at Easter time on the occasion of the Lord’s Supper (in 1644), and a sermon for Christmas concerning the deity of Christ, written at Kesselsdorf, Slovakia, in 1657.

So, some digging around to find what the Hutterites rather than the Haban in Slovakia were doing has led me into an exciting journey. And clearly there is more for the Baptist and Anabaptist department at IBTS to try to discover.