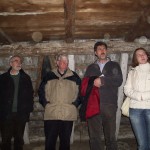 Tuesday morning started early. At 07.00, fourteen of us  – students, staff and community members – were standing in the parking lot awaiting boarding the cars for a field trip to the Anabaptist House in Sobotište (Slovakia) and a stop at Mikulov (Czech Republic, Moravia) where Balthasar Hubmaier had left a significant trace. IBTS is one of the group of partners who have a stake in the house built by the Anabaptists in what used to be their settlement in Sobotište, so we try to visit the house regularly to see it is in good order and to introduce our students to this particular part of our history and heritage.

The crew in our car shared some of the impressions from this journey as we travelled back to Praha on the already dark highway leading to Brno and further on to the capital of the country. Of course, this was an excellent opportunity for students to see some traces of the life of the Anabaptists rather than only studying about them from the books. Also, travel in itself is something than can be a treasured memory; certainly this was true in this case.

One of the things you cannot help but notice is the difference in the attitude and spirit once you leave Prague and especially when you enter Moravia and then Slovakia. There is that friendliness typical for small, provincial places, demonstrated today for us not only in people greeting us (including a little boy going home from school) but also in being given a special grace in the Sobotište museum when upon learning we have come a long way to see the place but have very little local currency, we were let into the museum: “Just come in!”

The museum itself – two rooms, one of them related to the Anabaptist past of the town – had for us a fascinating story of how Sobotište was the cradle of the first credit cooperative in the world (1845!) in its “Small Farmers’ Society in the Small Town of Sobotište,” just a few months after the Society of Equitable Pioneers started a cooperative for trading in food in Rochdale (Northern England). One could reflect on the link between that cooperative initiative and the Christian commitment which has marked Sobotište even well after the Anabaptists were expelled.

Then the Anabaptist House – the surviving one from what used to be a sizeable Anabaptist community – is one of those places where the walls speak, encouraging and encouraging to reflect on the commitment these Anabaptist believers had to make and keep. We know comparatively little of them, so were wondering about artefacts and things like the bell-tower near the House and how it was used. Imagining how these ‘Anabaptist streets’ looked like in various towns throughout the region, you cannot help but wonder what was their daily life like and especially, how they got along living so close together.  One wonders of what effect it would have on the environment if the Baptists of today would come to live together in such close proximity and the commitment to share life. (Which made us reflect on our own little experiment of IBTS community.)

As we left Sobotište on our way to Mikulov, below us on the Czech and Slovak border there were the undulating hills in all their autumn glory, and we could see the neatly arranged vineyards on the south-facing slopes. Some of us were especially grateful for the good, sunny weather, having hoped to take some pictures for Ian Randall’s book on Communities of Conviction on Baptist Beginnings in Europe. The weather was almost too good  as it created too many shadows for perfect quality photography. But at least we got a good picture of Ian by the House!

The town of Mikulov with its castle and the ‘Anabaptist street’ and the extensive marks of its viniculture is a special place certainly well worth a visit (as with so many places in the Czech Republic beyond Prague, they often remain undiscovered). The castle of the Lords of Lichtenstein is now owned by the state, but at the moment being refurbished with the help of the grants enabled by Norway, Litchtenstein and Island  (one wonders about the latter as it has now been bailed out by Russia – perhaps Russia will now take over the work?)

Members of the crew of one of the vehicles: Lina, Keith, Helle, Radostina, Anna