Revival has broken out at IBTS! That is to say we have been enjoying immensely the 2008 Hughey Lectures by Professor David W Bebbington (University of Stirling) on the subject of “Baptists and Revival“. 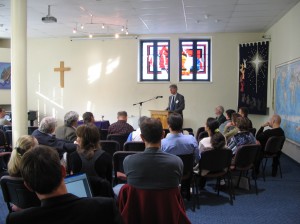 We (some of us especially) were fascinated to learn that revivalism was a ‘Scottish discovery,’ having begun in the 1600’s amongst the Presbyterians as a feature of the “communion season”. Well, that’s an encouragement to us in our focus on being a Eucharistic community!

On the other hand, revivals could be ‘planned events,’ such as in Charles Finney’s ministry of what Bebbington termed the ‘synthetic pattern’ of revival. The synthetic style spread into many places, not least via Lord Radstock and through Pashkov into the heart of Russian Baptist life and in some ways can still be detected there today. Yet the pattern which became the standard in many places during the latter part of the 20th century was what Bebbington calls the ‘modern style’ with its professionalism and target on urban life, particularly popularised through the evangelism services of Billy Graham (who today is celebrating his 90th birthday).

The newest pattern of ‘global revival’ has been marked by spontaneity and local cultural influences, such as in the case of the Effattaa revival in Estonia in 1970s which some of us sitting in the room could remember participating in.

Baptists have contributed to various types of revival and have been involved in different styles, without any one style being most prominent. As Professor Bebbington pointed out and indeed sought to demonstrate through these Hughey Lectures, further analysis requires a holistic approach encompassing both the research of the individuals and the whole of their social contexts.

Particularly illuminating was the story of the revival in Washington (not DC, but a small community in the then  Republic of Texas) in 1841 as an illustration of the evangelical microcosm of the 19th century. The awakening there had an impact on the infant Republic and prevailed against the ‘Antimissionary Baptists’! (Later they were called Primitive Baptists. By the way, apparently there was also at one time a group called “disunited Baptists” – it is rather nice to be reminded we’re not the first ones plagued with nonsense such as this!) An association was established in order to carry forward mission as a feature of the churches around what we now know as metropolitan Houston. It also gave a certain prominence to Judge Baylor, after whom the university is named.  In other words, though focusing on individuals, their spiritual state, the call to repentance and baptism, the effect was experienced throughout the whole of the community.