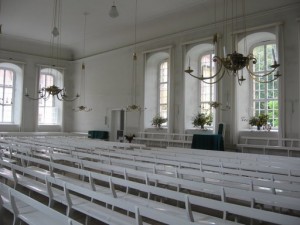 I would like to reflect a little bit more on the Church Hall of the Moravian Church congregation of Herrnhut, which was mentioned by Dima in the previous post.

What grasped my attention foremost was the fact that there was neither a pulpit nor an altar in the church but only a big green table. The reason for such a furnishing of the prayer hall points to the continuing emphasis on the origin of the Moravian Church organised on the basis of the priesthood of all believers. Raised or privileged places for clergy are therefore not part of the church furnishing. Many of the various services are held by laypersons. The cleric’s robe is only worn during the presentation of the sacraments. Furthermore, the green table is referred to as the liturgical table and serves as the location of the leader for the particular church gathering. The table is considered to be a worktable – as a reading table, as a surface for the lectern (for holding sermons, lectures, etc.), as a table for the Holy Communion service and as a location for baptism. Green is considered as the color of life.

In addition, everything in the church was painted in white because the Moravians considered it to be the color of happiness. I was impressed by the fact that they still hold on two important principles according to which there are no reserved seats for privileged members, and also no gaps can be left between individuals. In other words, the pews are filled by congregation, which opens the space for (small b baptist) theological reflection revolving around the phenomena of second and third row Baptists who for some reason prefer to be encircled by empty seats. Anyhow, I might say something more about it when I write my next blog entry.