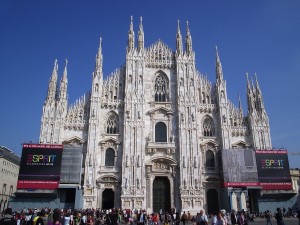 I’m having quite a good time in the ECEN Assembly. A few people were curious to learn I’m a Baptist, with a hint of “we thought Baptists didn’t care about things like environment.” Hmmm…. I’m also glad to report that Italian Baptists have been quite instrumental in helping to organise this meeting.

As is often the case with ecumenical gatherings, things can be quite slow at times, so some sessions required some patience, but as usual the breaks with their conversations and contacts have been meaningful and useful in various ways. Yesterday afternoon provided another highlight, when, organised by an Italian Baptist, we held an ‘Hour of Silence’ behind the Milano Cathedral, wearing signs which were aimed at drawing attention to the issue of climate change and our concern about it. 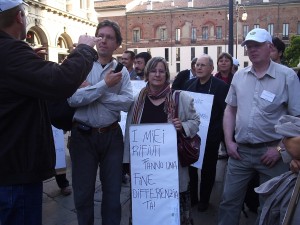 Preparing for the Hour of Silence

Standing in this ‘bubble of silence’ was easier than I thought – perhaps because the Milanese provided plenty of sight for eyes as they were passing by on foot or on their bicycles, a number of them stopping to read the signs and to ask more about our purpose. Standing there together as a group of Christians consisting of scientists, theologians, and members of various churches felt very meaningful and it was a good respite from words. I wonder if the church would do better if it was using the gift of silence more often and more intentionally?

The other thing I began to wonder about, on a personal level, is whether it’s time for me to make a more deliberate commitment about limiting my meat consumption in order to do my part in reducing methane emissions (which contribute to nearly a fifth of global greenhouse gas emissions and may be more detrimental than transport). The Intergovernmental Panel on Climate Change recommends one meat-free day per week, 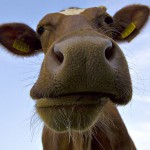 which I already do, but could do more, and especially avoid beef, lamb and other meat of animals who burp and, ehm, produce gases otherwise. I’m interested to know of any church or organisation that is working in this area – if you do, or if you’ve already lowered your own meat consumption, please let me know!..