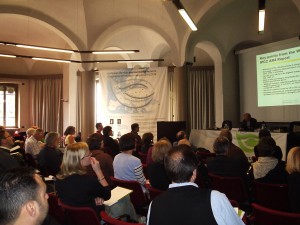 This is the theme of the 7th Assembly of the European Christian Environmental Network (ECEN), currently taking place in a lovely Villa Sacro Cuore near Milano. I’m taking part as a representative of IBTS. There are nearly 100 participants from different churches and organisations in Europe, though most of them are from the ‘West’. Thus for me the most pressing part of the challenge of our theology of creation care remains this: how our talk about ecological theology can, and should, be rendered in the language meaningful to an Eastern European believer. I’m thinking particularly of some of our students, coming from Central Asia, who are glad to have 12 hours of electricity per day; or many others, who live in societies which quickly learned the new consumerist ways but also still carry the implicit legacy of Soviet times when natural resources, when available, were ‘cheaper than mushrooms,’ as we say in Lithuanian, and all for your use if only you could get to them. Hopefully, there will be opportunities to discuss the Eastern European situation and perspectives during this meeting.

But in the meantime, we are concentrating on the topic of Climate Change and this morning have been hearing a scientific perspective on this issue by Prof Jean Pascal van Ypersele, Vice Chair of the Intergovernmental Panel on Climate Change, Nobel Prize winner 2007). Scary!..