Alex and Phil have been a part of our community for a couple of years already, with Alex graduating last May with an MTh in Applied Theology. Phil has been involved in teaching English and is also working towards an MTh in Contextual Missiology. This year, they are leading our Certificate in Applied Theology programme. Phil is reflecting on their first days with the new students:

Over the previous four months Alex and I have been happy, excited but, let’s face it, mostly terrified due to our imminent venture into the seemingly uncharted territory of parenthood. Life has become much more focussed on internet searches for the most versatile buggies (strollers) and the most eco-friendly nappies (diapers) than I ever remember it being before!

However, few prospective parents have the preparatory opportunity of developing their parenting skills by being entrusted with the welfare of sixteen students (with the possibility of two more still to arrive). But this is exactly the privilege Alex and I have been granted for this academic year. Our surrogate children have been with us for over two weeks now and are providing the kind of challenge that one would expect from a group this size with ages ranging from eighteen to thirty. Those who know IBTS will know that I am referring to the phenomenon that is the CAT Programme.

The Certificate in Applied Theology Programme lasts for one academic year and welcomes students of various ages whose first language is not English. It is IBTS’s only undergraduate study programme and the students (or CATs) who take part end up being the dominant student presence on campus throughout the year. It consists of an intensive English programme lasting until the end of the first trimester, followed (with a little overlapping) by an intensive theology programme for the second and third trimesters. For any particularly gifted CAT students, this provides an excellent platform to move on to further, post-graduate theology study at IBTS.

After two years in Prague, this is the first time Alex and I will be officially involved with the CATs as Course Leaders and, as with Alex’s pregnancy, the new-found responsibility has already had its ups and downs. Alex has taken on some of the English teaching, along with Tima and the legendary Janice Randall (more about them, or perhaps even entries by them, in future posts!) while I’ve been attending some of the Masters level courses but next week English teaching responsibility reverts to me. Perhaps actual parenthood will be relatively straightforward after this! 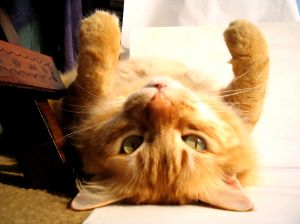 As the year continues, I am sure there will be a number of blog-worthy occurrences and hopefully I will have the opportunity to provide updates for you. For now I will leave you with this thought: Many of the CATs are more than capable of doing exactly what they should not and seemingly setting out to infuriate Alex and myself. However, just as with their furry namesakes, when you look into their big eyes, it’s impossible to stay mad for long!