Only in the Czech Republic can one add greasy sausages and frothy pivo to the beautiful production of Antonín Dvorák’s opera Rusalka. 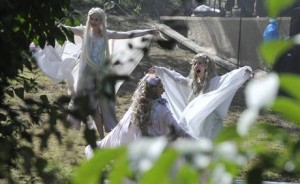 Saturday afternoon a group from IBTS joined the crowds trailing through the paths of the Šárka Valley for this once a year musical performance hidden in the forest of Prague 6. The cool of the woods and the warmth of the sun was the set for the opera which told the story of Rusalka, a water nymph who falls in love with a human Prince with the sacrifice and pain of love lost and found… and in Dvorak’s opera, eventually lost forever.

Families with young children, teenagers and young adults, up to rows of elderly Czechs  found spots amongst the trees and ant hills to settle down for the three act performance by members of the Prague National Theatre and the Prague State Opera.

The breaks between acts allowed the audience (and performers!) to seek sustenance at the kiosks conveniently erected around the wooded area with sausages, grilled chicken and cold draught beer or a bottle of cola. However, lest we forget that we were actually at the opera, the audience was reminded to have their mobile phones switched of and remain seated during the performance. 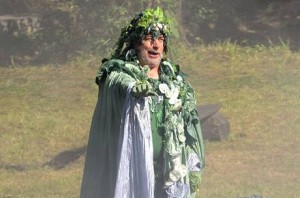 I never cease to be amazed at the Czech people’s love for the arts and culture – from the youngest school child to the oldest pensioner the appreciation for various exhibitions and performances is made clear by wide eyes, tapping feet and full attendance. For others who are not keen to jump at every opera visiting opportunity, the offer of beer and sausages was a great impetus for this cultural experience!