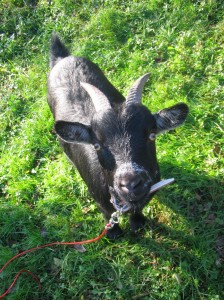 Who would have thought we have something in common with an SBC seminary! “Four hundred goats descended on the verdant hillsides of Golden Gate Baptist Theological Seminary in July, cutting the grass as well as the seminary’s costs for landscaping staff. (…) The three different kinds of goats -– alpine, angora and pigmy -– were supplied with water, a salt lick and all the delectable natural grasses and poison oak they could eat on about 50 acres of the campus.”

And we thought we were on the cutting edge of ecological lawnmowing!.. 396 goats behind. But then on the other hand, our four goats live with us full-time and thus have entered in a rather deep relationship with us (especially staff and students who have been involved in herding them, feeding them, or assisting in the birth of the kids). There have been some talks about enrolling them in one of our study programmes but so far they don’t look like ready for applying.

It will be interesting to see how this year’s new students will react to our enthusiasm for animal husbandry and the insistence on the importance of recycling, saving electricity, water and heat, cleaning the campus regularly, etc… It can be a real stretch, for some especially: a stark illustration of how much our statements of belief in the doctrines of creation and resurrection can differ from those driving forces of our motivations (or as we often refer to them here, convictions) that are expressed in our daily lives. As an Eastern European, I can certainly confirm that a hard work – a conversion indeed – is involved in truly comitting to a life of praise to God the Creator.

Goats are great fun. But they’re more than that: a part of the challenge we hope to set before all of the members of our community about our role in the stewardship of creation – in matters big and small.